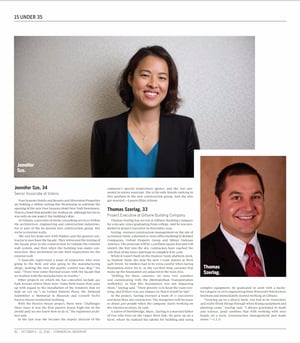 Four Seasons Hotels and Resorts and Silverstein Properties are holding a ribbon cutting this Wednesday to celebrate the opening of the new Four Seasons Hotel New York Downtown. That is a hotel that Jennifer Sze worked on, although her focus was only on one aspect: the building’s skin.

At Vidaris, a provider of niche consulting services within the architecture, engineering and construction industries, Sze is part of the 60-person new construction group. Her niche is exterior walls.

“I basically supervised a team of inspectors who were going to the field and also going to the manufacturing shops, making the sure the quality control was okay,” Sze said. “There were some thermal issues with the façade that we worked with the manufacturer to resolve.”

Other projects on which she has consulted include 432 Park Avenue (where there were “some field issues that came up with regard to the installation of the windows that we kept an eye on,”) 50 United Nations Plaza, the National September 11 Memorial & Museum and Cornell Tech’s Passive House residential building.

With the Passive House project, there were “challenges there since it was the first passive house high-rise in the [world and] no one knew how to do it,” the registered architect said.

In the last year she became the deputy director of the company’s special inspections agency, and she was promoted to senior associate. She is the only female ranking in this position in the new construction group. And she also got married.