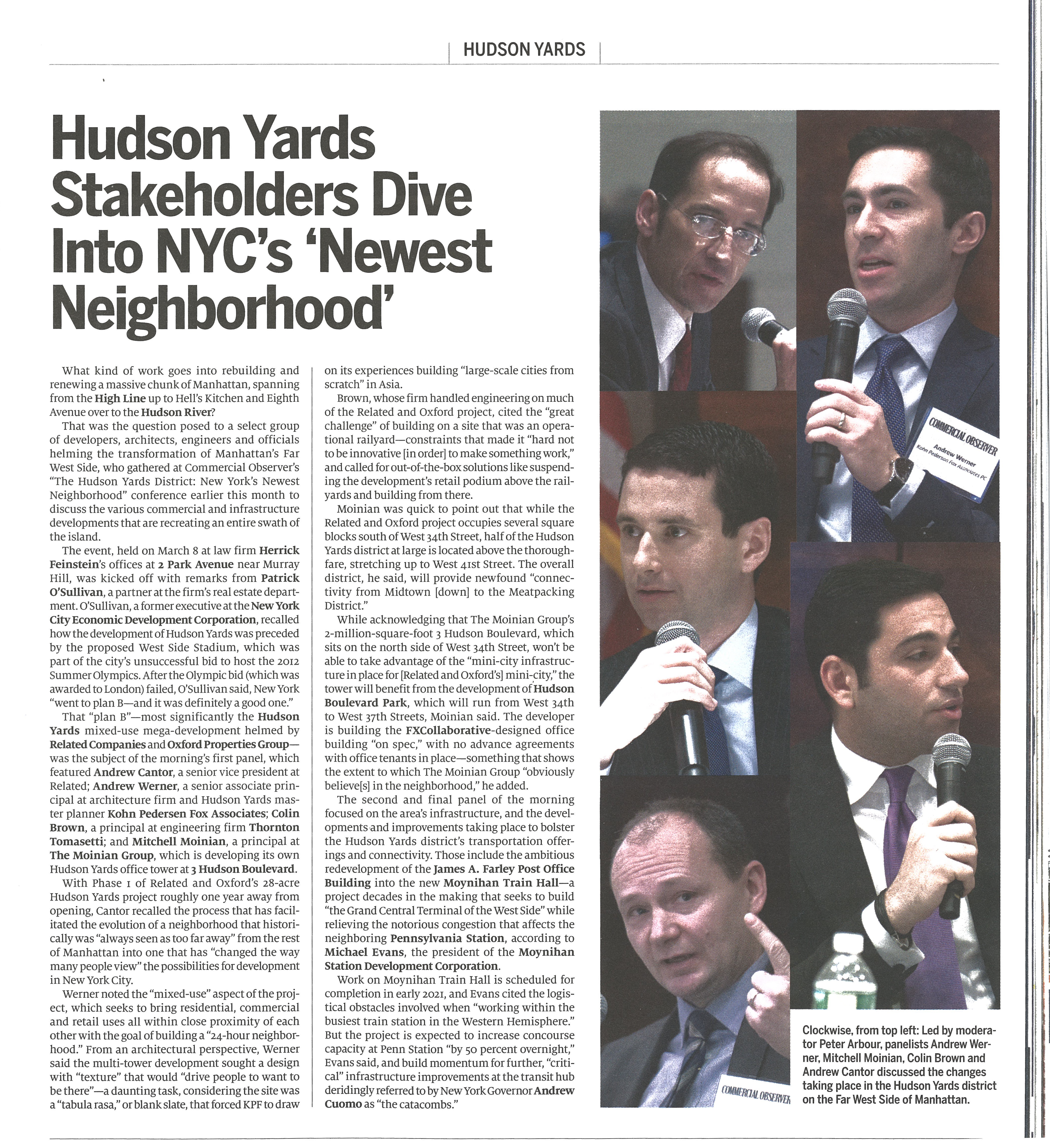 What kind of work goes into rebuilding and renewing a massive chunk of Manhattan, spanning from the High Line up to Hell’s Kitchen and Eighth Avenue over to the Hudson River?

That was the question posed to a select group of developers, architects, engineers and officials helming the transformation of Manhattan’s Far West Side, who gathered at Commercial Observer’s “The Hudson Yards District: New York’s Newest Neighborhood” conference earlier this month to discuss the various commercial and infrastructure developments that are recreating an entire swath of the island.

The event, held on March 8 at law firm Herrick Feinstein’s offices at 2 Park Avenue near Murray Hill, was kicked off with remarks from Patrick O’Sullivan, a partner in the firm’s real estate department. O’Sullivan, a former executive at the New York City Economic Development Corporation, recalled how the development of Hudson Yards was preceded by the proposed West Side Stadium, which was part of the city’s unsuccessful bid to host the 2012 Summer Olympics. After the Olympic bid (which was awarded to London) failed, O’Sullivan said, New York “went to plan B—and it was definitely a good one.”

With Phase 1 of Related and Oxford’s 28-acre Hudson Yards project roughly one year away from opening, Cantor recalled the process that has facilitated the evolution of a neighborhood that historically was “always seen as too far away” from the rest of Manhattan into one that has “changed the way many people view” the possibilities for development in New York City.

Werner noted the “mixed-use” aspect of the project, which seeks to bring residential, commercial and retail uses all within close proximity of each other with the goal of building a “24-hour neighborhood.” From an architectural perspective, Werner said the multi-tower development sought a design with “texture” that would “drive people to want to be there”—a daunting task, considering the site was a “tabula rasa,” or blank slate, that forced KPF to draw on its experiences building “large-scale cities from scratch” in Asia.

Brown, whose firm handled engineering for much of the Related and Oxford project, cited the “great challenge” of building on a site that was an operational railyard—constraints that made it “hard not to be innovative [in order] to make something work,” and called for out-of-the-box solutions like suspending the development’s retail podium above the railyards and building from there.

Moinian was quick to point out that while the Related and Oxford project occupies several square blocks south of West 34th Street, half of the Hudson Yards district at large is located above the thoroughfare, stretching up to West 41st Street. The district at large, he said, will provide newfound “connectivity from Midtown [down] to the Meatpacking District.”

While acknowledging that The Moinian Group’s 2-million-square-foot 3 Hudson Boulevard, which sits on the north side of West 34th Street, won’t be able to take advantage of the “mini-city infrastructure in place for [Related and Oxford’s] mini-city,” the tower will benefit from the development of Hudson Boulevard Park, which will run from West 34th to West 37th Streets, Moinian said. The developer has commenced work on the foundation of the FXCollaborative-designed office building “on spec,” with no advance agreements with office tenants in place—something that shows the extent to which The Moinian Group “obviously believe[s] in the neighborhood,” he added.

The second and final panel of the morning focused on the area’s infrastructure, and the developments and improvements taking place to bolster the Hudson Yards district’s transportation offerings and connectivity. Those include the ambitious redevelopment of the James A. Farley Post Office Building into the new Moynihan Train Hall—a project decades in the making that seeks to build “the Grand Central Terminal of the West Side” while relieving the notorious congestion that affects the neighboring Pennsylvania Station, according to Michael Evans, the president of the Moynihan Station Development Corporation.

Work on Moynihan Train Hall is scheduled for completion in early 2021, and Evans cited the logistical obstacles involved when “working within the busiest train station in the Western Hemisphere.” But the project is expected to increase concourse capacity at Penn Station “by 50 percent overnight,” Evans said, and build momentum for further, “critical” infrastructure improvements at the transit hub deridingly referred to by New York Governor Andrew Cuomo as “the catacombs.”

The expansion will also add 50,000 square feet of new meeting room and breakout room space, as well as a new 6,000-person capacity ballroom that will be “the largest ballroom in the northeast,” according to Stout. There will also be upgrades to the Javits Center’s infrastructure, including a new three-story electrical transformer building and a new truck-marshalling facility that will be built on West 40th Street.

“We don’t want people to think of Javits as low-rise protection for Hudson Yards’ river views,” Stout said. He added the convention center, and the commerce it will bring to the Far West Side, will spur further hotel and retail development and help Hudson Yards achieve its goal of becoming “a vibrant 24-hour neighborhood.”