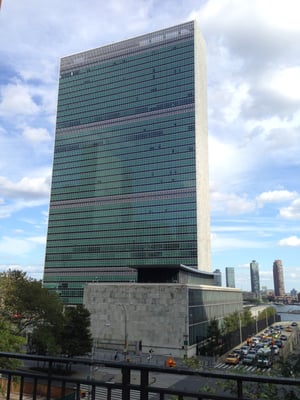 After almost a decade of discussion and debate, in 2007 the United Nations initiated a multi‐year
renovation of its New York City headquarters, the Capital Master Plan (CMP). The CMP was the most
extensive renovation program for the United Nations campus since the project’s initial construction in
the early 1950’s.

There were several drivers of the CMP including enhancing sustainability, upgrading security protection
from the significantly increased scale of external threats, bringing the campus into code compliance for
fire and user safety, conforming to accessibility and other international and local codes that have
evolved over the decades, installing state of the art IT and mechanical/electrical infrastructure, and
general improvements in conferencing and office space layouts.

Although each of these drivers were functionally critical, enhanced sustainability was, politically, the
most important. For decades the UN hosted inconclusive efforts to develop a coordinated world
strategy to slow the pace of climate change, including global conferences in Rio in the 1990s, Kyoto in
the 2000’s and Copenhagen in 2009. In more recent years, the world witnessed a far higher volume of
widespread and damaging weather events. These forces of nature created a new shared sense of
urgency, creating millions of refugees, which resulted in unusual cooperation and focus in Paris last year,
where a climate change “commitment” was reached. The UN, led by the Secretary‐General, was
amongst the leaders moving the world toward action to combat climate change. With the CMP
renovation, the UN demonstrated it was not just an advocate for climate change, but was ready to walk
the walk.

For the CMP, sustainable design performance targets were defined in a wide range of areas: operational
energy use reduction (with associated carbon emission reductions), water efficiency, use of
environmentally‐preferable materials, and measures to improve indoor environmental quality.

Among these initiatives, however, one of the most fundamental was the decision to renovate the
existing campus buildings as opposed to demolishing the complex in favor of new construction. While
there were clearly multiple reasons to justify renovation of our iconic, classical, mid‐century modern
masterpiece, the sustainability aspect of the decision has tended to be overshadowed by the historical,
cultural, and architectural considerations. In large part this is because the sustainability benefits are not
easily quantified, and are therefore typically acknowledged on an intuitive basis (e.g., preservation saves
“many tons” of material), rather than quantitative. When reviewed in more detail, however, the
benefits of renovation are substantial enough to warrant further consideration.

This report has been developed to shed more light on the magnitude of the benefits inherent in
preserving of the “bones” of an existing building. At the UN complex this specifically encompasses the
structural elements, opaque envelope assemblies (the solid exterior walls and roofs), and key interior
core walls. These elements represent a large “embodied energy” investment, and also carry an even
larger carbon emissions burden that cannot easily be offset by new construction, even if we assume that
new construction will result in more energy‐efficient building operations.

The calculations from this report indicate the following: